How to Use a Drain Snake 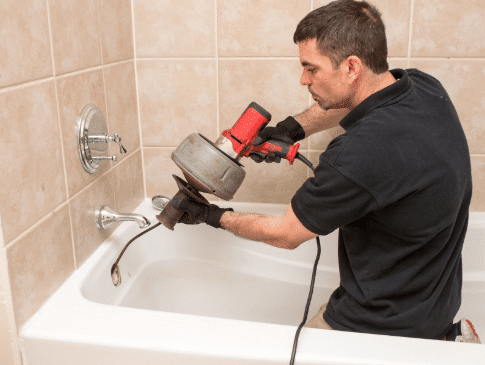 Some of the most common plumbing issues for residents of Arlington’s plumber and the DFW metroplex are clogged pipes, toilets and drains. Fortunately, most clogs can be removed with a plumber’s snake or drain auger.

Typically, a plumber’s snake for household use is 25 or 50-feet long. It is basically a long, flexible metal cable with a wire shaped like a corkscrew on one end and a handle or crank on the other. This snake is used when an obstruction is too big for a plunger to handle but not so big that you need pressurized water jets to clear the pipes used by a professional drain cleaning company.  Here, we’ll cover the basics of setting up and using a drain snake to clear a clogged toilet or blocked drain.

This can be a messy job, so be sure to wear clothes you don’t care about ruining and place towels under the pipes you are working on. The following steps are the basic way to use a drain snake:

How To Use A Drain Snake On A Toilet

You will snake a clogged toilet in the same way that you would any other pipe. The primary difference is that you will want to use a toilet auger instead of a regular drain auger to do the job. These are different in that they won’t leave scrape marks in the bowl of the toilet.

How To Snake A Shower Drain

Most clogged shower and tub drains are the result of soap scum and long hair mixing together and are fairly easy to remove. Most shower drains have a 2 inch drain that goes straight down to a trap under the base of the shower. You will want to use a snake with ¼ or 5/16 inch thick cable, which should fit into most drains. Then you will use the snake in the same way you would on a clogged sink.

Using a snake to clear obstructions from pipes is a job people often can do on their own. However, if you’re having trouble snaking your drain and need a professional plumber in Arlington, give us a call at (817) 200-4703. The team at All Masters Plumbing are here for all your plumbing needs.